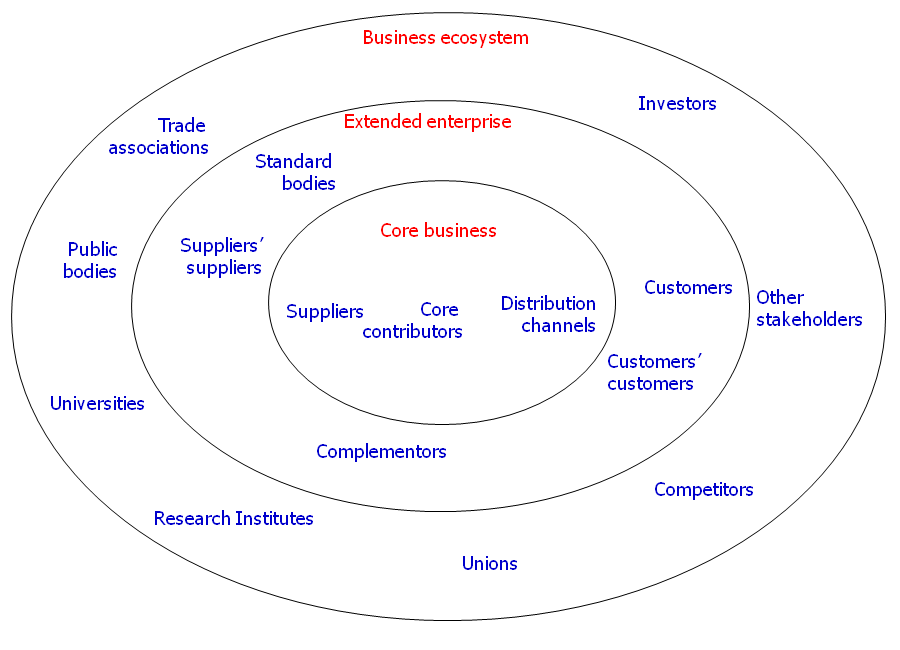 For decades, law firms have upheld strong boundaries between the firm and the society in which they operate. The law firm maintains itself as a sturdy fortress, within which hierarchy, culture and tradition go unchallenged. The career path remains clear; associates and junior lawyers execute repetitive work in an attempt to get to the promised land of the equity partner with the result being that billable hours are silently killing all innovative efforts happening lawyer-to-lawyer.

In the broader business world, though, things are changing. In a recent publication, Bain & Company identified a core principle for the future survival of companies is to value ecosystem over assets. Instead of maintaining a fortress mentality, the modern enterprise flourishes best as an open ecosystem, with far more permeable boundaries to the rest of the business world.  Some of the worlds’ largest and most successful companies are famously known for doing so, like Apple, Google and Facebook.

There is a well-known quote by Lars Kolind, who is the former CEO of the Danish company Oticon, which explains the value of developing a corporate ecosystem as opposed to maintaining a fortress mentality.  Kolind sums it up this way: “Traditional companies are not able to compete with those who have 100.000 ambassadors, but only 100 on their payroll”.

For the most part, the value of the ecosystem has not yet been recognized by law firms, which continue to be hidebound in their approach to business organization.  Among law firm managers the prevalent attitude remains “Law as a profession is too complicated to do that, it is not possible” – until, of course, it becomes not only possible but necessary. The legal industry exalts the notion of following precedent, which influences almost everything legal professionals do, so it shouldn’t come as a surprise that lawyers are disinclined to be the first to try new things and innovate, and law firm management instead prefers the posture of being ‘Smart Second Movers’.

Yet even with resistance in culture, mindset, and incentive structures, law firms are starting to undertake some modest experimentation, which is gradually expanding the boundaries of the traditional law firm. This is evident in the way law firms have begun to engage with business startups, a trend which has recently blossomed into a fad among prominent law firms. The engagement often starts with lawyers establishing a client relationship with startup companies, often on a pro-bono or low-bono basis, typically focused in high value industries such as technology, pharmaceuticals and energy. Working with startups is an initial step through which lawyers begin to realize how startups themselves flourish by establishing an ecosystem, in which they partner and collaborate to obtain critical resources to support their growth.  From this initial engagement, a number of large law firms have gone significantly further down the path, setting up their own incubators to bring startups into their own sphere – in other words establishing ecosystems of their own in which startups will hopefully flourish.

The question is why. Why should law firms begin to focus on ecosystems over assets, when the old business model had worked so well for so many years, with each firm operating as an imperium unto itself? The reason is scale. Up until now law firms have been able to get away simply by competing against the firm next door, which allowed them to limit themselves to relying on internally held assets. But how does a traditional law firm compete with one that has begun to develop an underlying ecosystem? It turns out to be a far from level playing field if one firm is limited to utilizing the workers they have on their payroll, while the other can source freelance experts to solve specific tasks. Similarly, when one firm is limited to leveraging only the technological solutions they have bought or licensed in-house, it is disadvantaged compared to another firm that has ready access to technology resources thanks to collaborations and partnerships with third party developers. And in the arena of legal recruiting, consider the disparity between a firm that only has access to the talent they recruit through regular university meetups and recruitment channels, compared to the firm that implements a  formal collaboration with the law school faculty, and thereby secures a first look at the most talented students from very early on.

Not only can the ecosystem-strategy give access to talent coming from universities, a diverse portfolio of technological solutions, and the ability to source experts on a case-by-case basis. It is also a powerful way to engage with clients and co-create new products and services, increase loyalty, promote CSR efforts and generate new case-work.  All around the market, we are beginning to see law firms who have embarked on this journey. Large international firms like Pinsent Masons with their Vario platform, and Allen & Ovary with their legal tech incubator FUSE, are both examples of the way law firms are very deliberately starting to develop ecosystems around them, instead of simply adding resources with the firm’s traditional boundaries.

It is fairly clear to me, that law firms everywhere will at some point have to address ecosystems as part of their business strategy. Because if they don’t, they will come to realize sooner or later that their concrete fortress has been outflanked and outmaneuvered by the ecosystem next door.  That’s the reality of the business world today; asset-based companies are slow to act and respond to rapid changes in the market, whereas platform-based companies are flexible and quick to respond

Do you want to know more about our vision for the future of law firms? Download our e-book The ‘Fluid’ Law Firm here: https://contractbook.co/library/the-manifesto-of-the-fluid-law-firm

Anders Spile is an Exeucutive Client Advisor with Contractbook, a European based contract management platform.